ETFGI reported that ETFs and ETPs listed Globally gathered net inflows of US$37.48 billion in March, bringing year-to-date net inflows to US$99.14 billion…..

Assets invested in the Global ETF/ETP industry finished the month up 1.42%, from US$5.32 trillion at the end of February, to US$5.40 trillion, according to ETFGI’s March 2019 Global ETF and ETP industry landscape insights report, an annual paid-for research subscription service. (All dollar values in USD unless otherwise noted.)

Assets invested in the Global ETF/ETP industry reach a new record US$5.40 Tn.

April 11th marks the 19th anniversary of the listing of the first ETF in Europe.

Assets invested in the Global ETF/ETP industry rise 1.41% in March.

“Markets appear to have returned to the relative calm they had grown accustomed to over the past few years. Returns for developed indices decelerated in March, as the effects of more cautious and accommodative central bank policies lose steam.

The Topix 150 in Japan was up 0.32% in March, bringing year-to-date returns of 7.96%. Emerging & Frontier returns continued to outpace developed markets.

The S&P Emerging BMI and Frontier BMI finished March up 1.74% and 1.37%, bringing year to date returns to 10.45% and 8.82%, respectively.” according to Deborah Fuhr, managing partner and founder of ETFGI.

These funds are co-managed by Merrill Lynch and track the Dow Jones Euro Stoxx 50 and Stoxx 50 indexes. 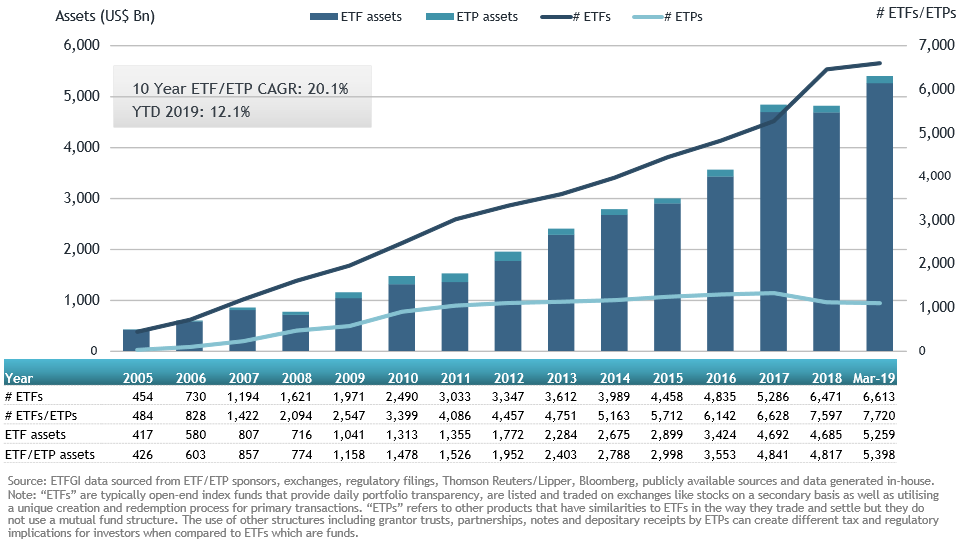 Equity ETFs/ETPs listed Globally attracted net inflows of $16.51 Bn in March, bringing net inflows for 2019 to $36.30 Bn, substantially less than the $100.52 Bn Mn in net inflows equity products had attracted by the end of March 2018.

Substantial inflows can be attributed to the top 20 ETF’s by net new assets, which collectively gathered $30.49 Bn in March, the iShares Core S&P 500 ETF (IVV US) gathered $7.19 Bn alone.

Investors have tended to invest in large cap equity/fixed income ETFs in March.

ETFGI : Global ETFs and ETPs industry at the end of 2020